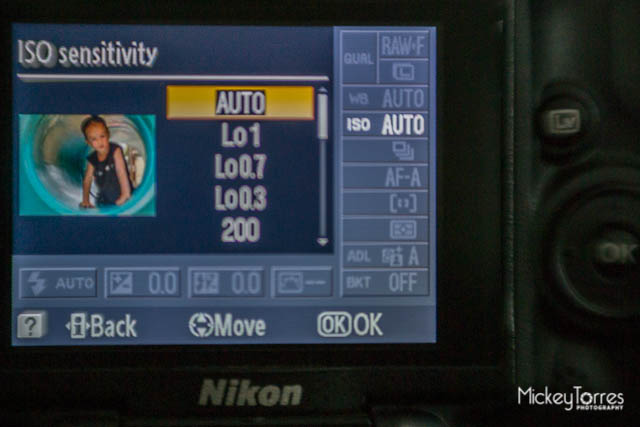 I’m often asked, what is the ISO setting of my camera? How do I use it? Even though it seems like a simple answer, it is not. In the old film days ISO was the light sensitivity of film, the lower the number, the more light it was needed to burn the image to the chemicals in plastic film. You would buy ISO 400 or ISO 800 to take pictures in dark days even at night time, but the higher the ISO the grainier the photos got. I remember when Kodak announced the Ektar 25 ISO film, it was supposed to be the clearest most amazing image with the smallest grains possible and to tell you the truth it was very good. (I think Adorama still sells Ektar 100 film)

What about the new digital cameras (DSLRs)? Well ISO is similar; however this time is not the film sensitivity we are measuring. New digital cameras have a light sensor, the part of the camera that actually captures light. Since the sensor does not change, what the camera developers did was use light amplifiers to augment the output of the sensor. This is what happens when you adjust the ISO of your camera, you are amplifying the light that the sensor is measuring. like a radio that the volume is increased and increased, the law if diminished returns applies to it, louder does not mean quality often the louder your radio gets the more distorted the sound quality becomes; same is true for the camera sensor, that’s why the higher the ISO of the camera the grainier the picture gets.
On most cameras ISO 100 it the best quality picture, requiring the most amount of light producing a crispier photograph, and as the ISO increase to 400, 800 even 12,000 where the quality of the picture would be significantly affected by amplification, it’s up to you, to decide what is acceptable quality when taking pictures in low light.

Sometimes it is required taking a night picture with good quality, for those instances you will need additional hardware and a different technique. Like the photograph that I took of “El Puente Dos Hermanos” in Puerto Rico a while back; I used my Nikon D3100 set to ISO 100 to capture that image. However the camera was mounted on a sturdy tripod and the shot was taken using a long exposure (about 15 sec. at f11). Using this technique allowed the sensor to capture more light by allowing it to receive a dimmer light for a longer time instead of using ISO amplification to increase the light, this prevented amplification distortion. This technique only works on objects that you know will not move for the length of the shutter speed (15 sec on this case).

I will be covering technique, aperture and shutter speed in other post, hope you come back to read them in the near future.